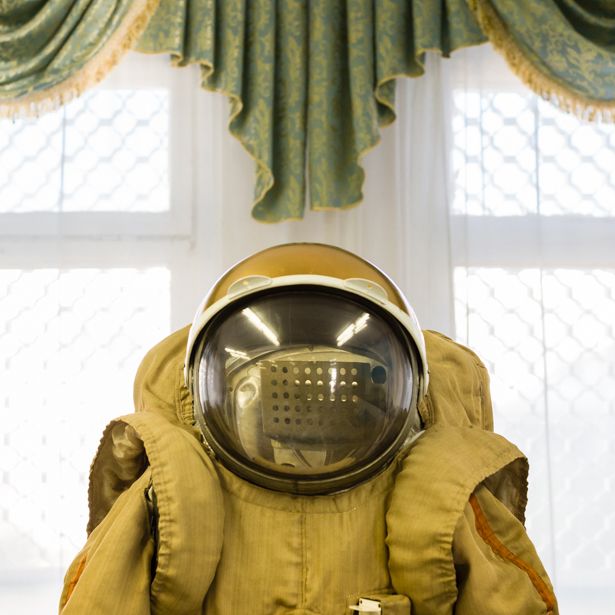 The idea of the conquest of extra-terrestrial space by mankind has always been inspiring in terms of culture. Thus this idea finds its expression in utopian designs of architecture, literature, fine arts and film.

On the other hand, there is little discussion about the way, how the actual departure to space since the late 50es has entered the everyday culture of the Soviet Union and it's associated countries at that time. Beyond the propagandistic media use of the first groundbreaking sucesses, motifs and symbolics of space travelling have been applied in many ways and variants for designing artefacts of public and private sphere. As consumer goods they often have been mass produced, and as objects of art they have been omnipresent in the streets.

At the same time, with the flight of the first Sputnik the utopian potential of space travelling performed new impact. The old dream of mankind, to reach the infinite, the sphere of the gods, became real. Only these epoch-making dimension of what was happening makes the fascination understandable, which was connected with cosmonautics especially in its pioneering phase.

In the West, however, due to the Cold War and the systemic competition with the USSR, the departure into space was realized to be far less fascinating at first, rather as shocking. As a result, politics determined the view on things there much more and repressed the perception of the utopian dimensions of the historic events. Less exciting phenomena, such as the spreading of cosmic motifs and symbols via the design of consumer goods and accessoires of everyday culture of the East have been less focussed – or were perceived as propaganda and ticked off.

Today, 50 years after the end of the race, that was finished with the first manned moon landing of the Americans, this underexposed spot of space travelling history is to be illuminated. Following an intensive search for traces of this cosmic culture in seven countries - in Kazakhstan, Tajikistan, Kyrgyzstan, Uzbekistan, Georgia and eastern Germany, as well as in the Russian Federation - the intention of this project is to close that gap and above all of lending visual expression to Cosmic Culture, of making it comprehensible to the senses.