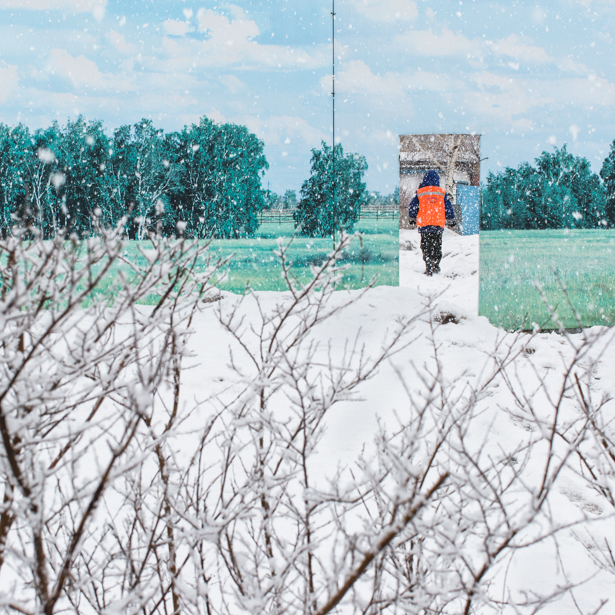 The pictures of Virtual Landscapes are telling sort of a comeback story: It is about nature returning from the vastness of the country back to the streets of big Kazakh cities.

Travelling round Kazakhstan several years ago, those tin fences could be found in countless places, usually used to cordon construction sites, as anywhere in the world. In Kazakhstan they are additionally used to protect recently achieved private property and to withdraw industrial fallow, investment ruins and other 'non-places' from public view. Thus in this context the 'material' function of tin fences always is mixed with socio-cultural and symbolic meaning.

Some years later, especially in the up-and-coming new capital Astana these fences almost completely disappeared - behind snowy mountains and barren steppes, lush meadows and endless birch forests. As sceneries of nature they became an element of re-stageing urbanity, in a so to speak reversed Potemkin project.

Aesthetics of nature are gaining different functions with that, for example reminding the rural tradition of Kazakh society; or separating private from public space in a symbolic way etc. It's understood, that these new artifacts of urban design themselfes are subject of ongoing changes and may be gone tomorrow, only to reappear somewhere else in a different form. The temporary and ephemeral placed in front or next to the firmly cast concrete of the modern city just confers a special charm on the phenomenon.

The series Virtual Landscapes shows, how fiction and reality are interlinked within this scenery. At the same time the pictures enforce their interaction by means of photography and produce a Chinese puzzle of visual layers: The single picture often does not reveal what is supposed to be the real world and what is a produced scenery or an image of nature. The boundaries between reality and staged, virtual reality are becoming blurred.